A Transmog-Party where Everyone’s Well-dressed – Except Us! 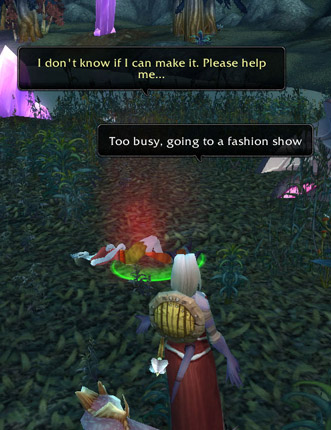 This friday I was invited along with Noelani to judge a transmogrification competition by Keelhaul (author of Disenchanting Azeroth aka The Mogfather) on US-Tichondrius.

Originally this is an idea Keelhaul has conceptualized, funded and hosted on his own across US servers.

He has given away 1.695.000 gold in total and has been featured on PC Gamer and WoW Insider among others. A skilled auction house seller who specialize in selling gear for mogging, he’s using the gold to ramp up a party where everyone’s well-dressed – except us!

Because these events are taking place on US servers, we’ve had to make US trial accounts and cheat the game to load US servers, which of course meant we attended on measly lvl 1’s. Much to our dismay, we couldn’t talk to anyone except in whispers which had been instigated by someone else first. Emoting was our best communicative tool. 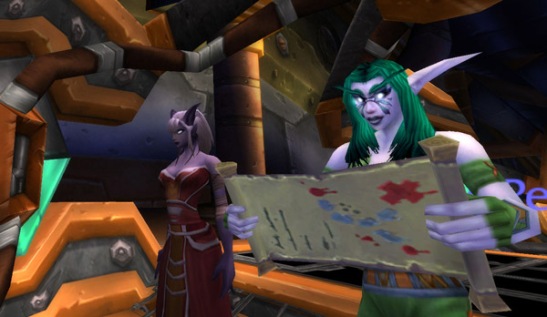 Our Alliance instantiations finding the way to the Ironforge Library.

Another downside of being EU is the bad hours! We started the event at 3 at night our time, and didn’t go to to bed until 8 in the morning because we were still too hyped to fall asleep – so crazy.

Judging outfits is both exciting but also hard, you don’t want anyone to be left out nor overlooked. Often we had to make decisions based on tiny details because people were basically wearing the same except for cloaks, weapons and pets – details that ultimately meant someone could push a price home.

I’ll give some examples: 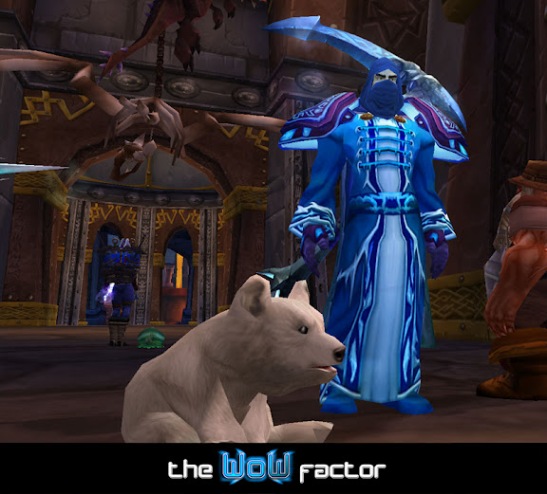 We gave Mãgùs the Alliance prize for “Most Unique”.

I love this outfit, he’s obviously emphasizing his frost spec, suitably using mage tier 2 Netherwind Regalia to fill the blanks. His robe, Glacial Robe, doesn’t have shoulders as part of the set, so wearing this robe requires some thoughtfulness. I like that he looks like a super bad ass ninja frost mage with his hood and the scythe makes him look even rougher.

The bear is just icing on the frost-cake, although I’m not actually sure it’s his. Nevertheless, to Mãgùs’ benefit, it makes for a great screenshot! 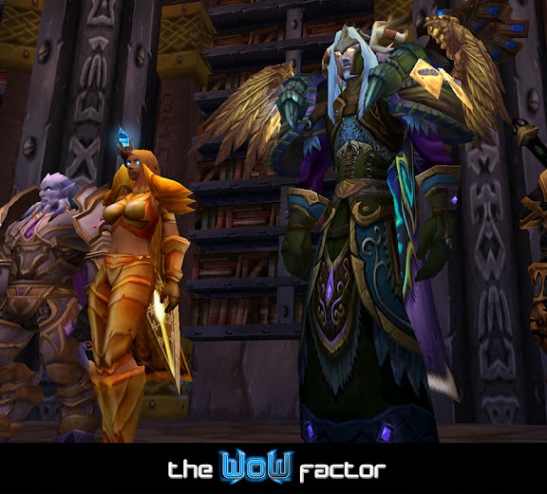 Here’s Mythikas. He’s what I would call a very handsome druid with his choice in mixing Heroic Stormrider’s set, Malfurion’s set and the Malorne headpiece. Furthermore, his staff is just beautiful, the cloak looks great – he appears majestic, like an archdruid.

He didn’t win a top prize but was a runner-up, however, he’s doing something I would like to introduce to WoWRoleplayGear sometime in the future – taking powerful pieces from tier gear and creating a whole new expression – a “remix”.

It’s my experience that druid tiers work especially well when doing this because you’ll find they all follow a nature theme with often brown and green hues. It’s a good tip if you really like tier gear, but still want to stand out. 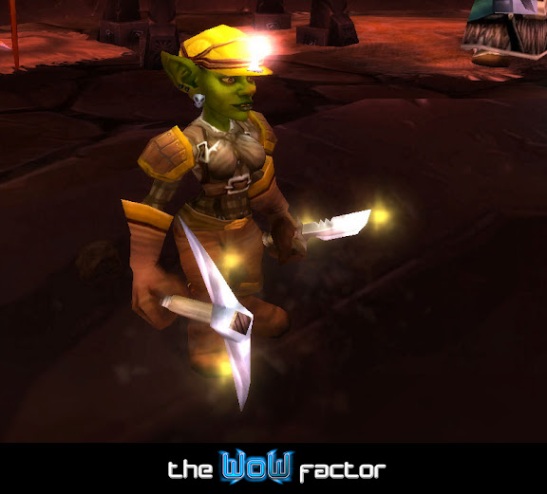 The fully mogged miner above is Vavaboom. It wasn’t hard to see that she was amongst the best sets Horde side had to offer, only problem was which category she dominated the most, which in the end became “best persona”.

I really wanted to whisper Vavaboom personally and tell her she had a new fan, but of course I couldn’t, a /kneel would have to symbolize my admiration instead. 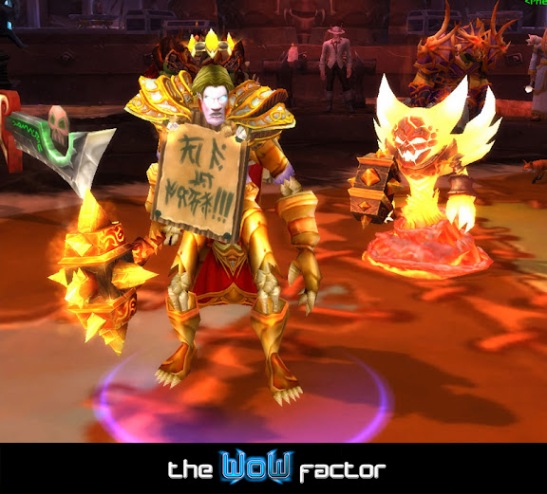 Isn’t he great! We’re looking at Vadgebendor a shiny and golden death knight perhaps undercover as a paladin. Keelhaul asked if he wanted the sign to be disregarded or not, and he decided to keep it on. Besides sporting a full Conqueror’s set, everything else matches, including the Lil’ Ragnaros in the background. He looked great and the choice to add the gimmicky Twilight Cultist sign earned him “Most Original”. He was the spice of Horde side that night, and he made us laugh. 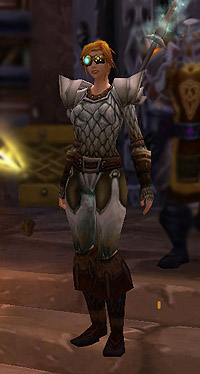 Here’s Boxer who sadly didn’t make it further than top 20. She is a personal favourite of mine, so I’ll give her some spotlight here.

She isn’t overly flashy, yet I think she has perfected that grey metalic hunter look. She reminds me of the steampunk hunter that Dreamy created and posted on her blog Drunkard’s Regalia.

Boxer has actually mixed and matched between several sets mainly Champion’s and Bonelink, and that’s what impressed me. I know Keelhaul appreciates good weaponry, and Boxer has a simple polearm on her back, still I think this set wins in simplicity. If you go to her armory page, it becomes evident that she has an extravagant bow that really pulls her set up a rank. I don’t remember seeing the bow during the event … see what I mean about missing details and perhaps making an oversight! 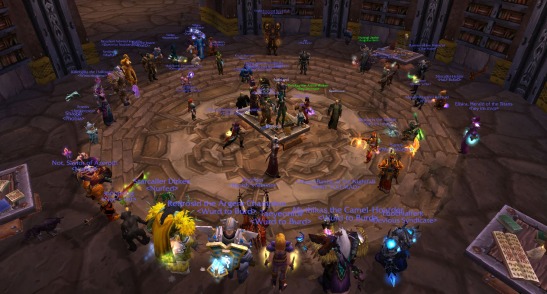 An overview screenshot of the Alliance judging round, situated at the Ironforge Library, a venue that I thought supported the event structure well. (Click for full size) 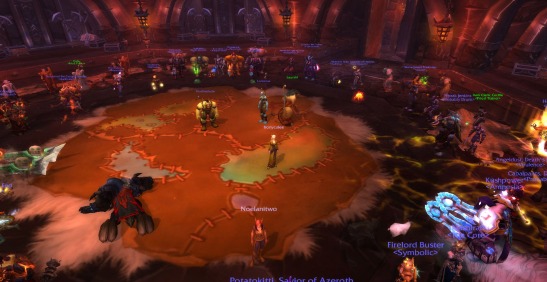 An overview of the Horde judging. We started off in the middle of Orgrimmar but people on mounts block out too much space, so we moved into Garrosh' hall. I hope he appreciated the show! (Click for full size)

Rumours say the number of contestants that showed up on US-Tichondrius Horde side were the highest yet for that faction. This is the final group picture. (Click for full size)

Aaand it looks like we’ll be doing it again – US-Arthas Alliance side only on the 16th.

More about the event:

Pictures watermarked “The WoW Factor” are from Keelhaul’s winner’s gallery which shows screenshots of all the winners from both factions, lots of good mogging outfits!

On WoWRoleplayGear we also wrote a follow-up article where you can see the full list of winners and runner-ups.

Lantanasham, the author of WoW and Other Musings wrote her account of the event in her post titled Transmog-a-licious. Lantanasham and her colleague were both a great assistance to us during the event in communicating with the crowd, helping with information and handling of prize money. A big thanks goes out to both of you!

14 comments on “A Transmog-Party where Everyone’s Well-dressed – Except Us!”