The Thing is, I Have a Game Trauma

I want to end it with a bang, to basically give going beserk a try. This will include a lot of killing, but before we get to it, there’s something I want you to understand.

I don’t know if I am excited or uncomfortable about the thought, probably just ambivalent. The “problem” is that when I play – so does my conscience, and this is not something I have a direct control of. Suddenly I just feel bad, it’s pre-thought and I’m left fiddling with words to describe how and why.

The thing is, I have a game trauma.

Let me explain: The Sims came out as a newborn a year before you did (in 2000). I still remember watching the ads on MTV with the catchphrase “Get a Life”, and I did – but I also took one.

In The Sims, you didn’t get a child generated from the gene pool of the parents as in The Sims 2 and 3. In the original game the only option of having children was adoption, and it was a completely randomized child. The personality traits were split into 5 sections: Neatness, outgoingness, activeness, playfulness and niceness.

When you made a sim yourself, you had a total of 25 points to spend on these traits, but children, whom were generated by the game, could have both less and more. Most often I seemed to get excellent children with very high scores.

… But this one time, I got one with really low traits, she was not nice, not playful. She also had a grumpy looking face and I was thoroughly displeased and felt my promising family had been ruined by this recently inserted evil child.

So I decided the solution was to kill her, forget about her and adopt a new child.

I knew of several methods to kill sims in the game, but I wasn’t sure if I wanted to put her in a room and have her starve to death, I needed something quicker and cleaner… this sounds soo wrong. *Cough*. The truth is, I had never killed a sim before, let alone a child-sim. 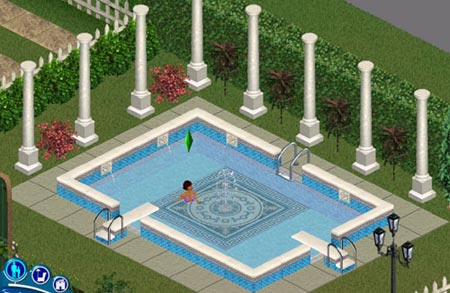 So I made a pool in front of the house, named it “The Trap” and made her jump in. I removed the stairs and hoped she would drown fast. Instead I watched in terror this child swim around the pool for what was probably a few sim-days, all meanwhile the parents went to work and did a lot of other mundane things completely contrasting the horror going on. I was constantly in doubt, but kept to the plan.

What I had forgotten was the hauntings dead sims will do, and thus the evil child scared me one dim evening, appearing as a ghost accompagnied by a shivering sound, walking aimlessly through the walls just to dissapear shortly after.

I knew about this feature but had forgotten, and now I was paying my dues. I had thought her death was insignificant to me.

I know this sim-child was not real etc etc etc, however this didn’t stop me from feeling bad about it. So I hope you are aware, that when we soon plunge into a moment of insanity together, it’s for the sake of this experiment. Maybe I’m testing my limits, maybe I’m testing you.

One comment on “The Thing is, I Have a Game Trauma”