As many others, this prompted me to immediatly log in to see what I was able to put together. I know a lot of players, whether they were roleplayers or not, have kept large bank collections of old tiers, old PvP seasons, pretty robes, funny weaponry and whatever item we had a connection to.

I’ve kept a few very simple outfits for my shaman, most of which are not possible to transmogrify because they include cloth. The blue outfit to the right used to be my favourite. The vest, a Bloodmyst Isle quest reward, had its beautiful and simple texture changed with The Shattering to a generic brown and gritty leather chestpiece.

Thankfully, I farmed the old Zul’Aman before the instance was removed and got hold of some original “Zul’Armani” from there. It’s tribal, it’s rough, it really suits a shaman.

So this will probably be my transmogear in the future. 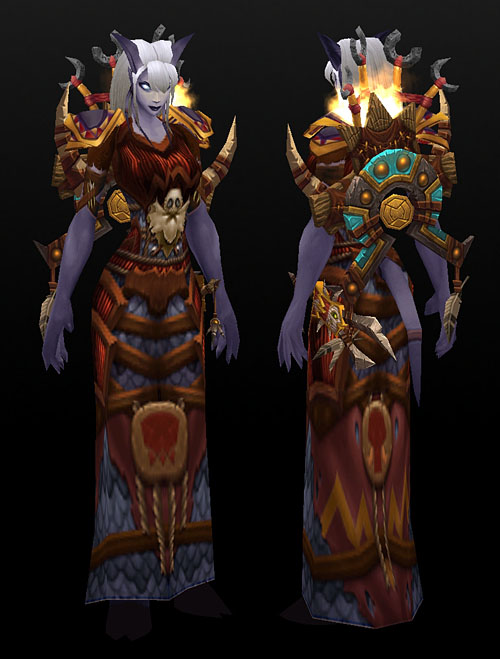 Except the shoulders are heirlooms and the original is not available any more – damnit! So I still need to find shoulders and gloves that match the rest.

Moving on to my priest, my old friend, my TBC queen. I raided Black Temple and Hyjal with this character so I was expecting her bank to be packed with goodies, old designer clothes picked right off the bleeding corpse of a tier six boss.

As I was rooting around, it became clear this old personal heroine of mine had cleaned out her bags a long time ago.

And then it came back to me, the first few days of leveling through Northrend, bags filling up quickly, a cynical look through the gear collected through 1½ expansion had made me throw out her shadowweave set, the iconic profile of a shadowpriest back then. I had given up a maxed mining skill for tailoring and had spent many hours swimming around Silmyr Lake in Terokkar farming motes of water to be able to craft this set, and I had thrown all this away.

My priest now only has a few recent PvP sets to show for herself, nothing that has any particular sentimental value to me.

Maybe I should just get her the Silver-thread set, a mean staff and sneak around as the shadow of a ninja…