Elford the (former) Executive and the Ironman Challenge

Meet Elford the (former) Executive. He is participating in the WoW Ironman Challenge. Of course, he doesn’t know this himself.

This was the self-portrait Elford had hanging on the wall of his (former) office. He liked the facial expression the photographer had captured, sly and arrogant. And Elford wasn’t self decieving, everyone around him would characterize him the same. The problem was that his (former) life as part of the upper crust of the Stormwind social life, had recently crumbled under his small yet grounded feet.

Elford had spent most of his adult life as the boss of at least someone. This was important to him, likewise was money and independence important. This meant that Elford had come in contact with the Steamwheedle Cartel, where he had learned more than one trick on how to maximize one’s profit. He had started a trading company exporting various consumer goods from the Stormwind region and soon he had expanded his network to include trading with Bilgewater merchants. 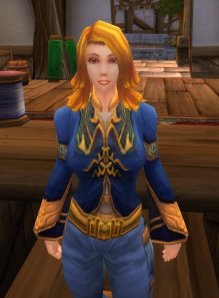 He had always kept safe from transferring goods that could lead to his immideate execution, he knew not to sell Alliance war information, military equipment or spellbooks, but he also knew doing business with a Horde faction, in itself was dubious. Still he thought exporting exquisitely sewn garments from the Stormwind tailors and Trias cheese through his Bilgewater contacts and on to the nobility of Silvermoon, were safe grounds. Blood elves were easily dazzled and many were quite rich, and thus very willing to pay a good price for a few peacock feathers. 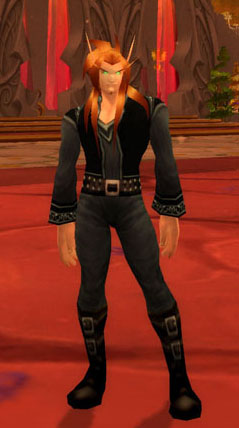 Spotted at "WoW Look Book" - Blood elves love good style, but they need a little help from an Alliance affiliate to get this shirt.

To Elford’s excitement, Stylish Black Shirts had become very popular in Silvermoon city. He was able to sell them with a ridiculously high profit and his frequent requests for new batches, made the renowned tailor Lisbeth Schneider suspicious, the only tailor to make these.

Being a strong supporter of the human forces and the Alliance faction, she wasn’t a simple tailor, but someone who had sewn extravagant clothing for captains and generals. One of her high standing customers had seen blood elves wearing these and Schneider didn’t like learning about her fine work being worn by the enemy. These shirts were her trademark so she took it personally.

Lucky for Elford, these were not matters serious enough to throw him in jail or get him executed, but Schneider pulled him to court, where he was deemed to pay everything he had earned by selling Schneiders work, back to her in “damages”.

The case had ruined Elford’s reputation as a sales man and Alliance supporter. His suppliers blacklisted him and refused to do business with him. The court had recommended that the best option for him, was to do some community service, starting in Elwynn Forest. This was not what Elford would call “good advice”. Nonetheless he was faced with the choice between going into more criminal activities, working for the Steamwheedle Cartel or simply doing what the court had said: Raising his reputation with Stormwind once more by doing menial work.

Elford was not a criminal, he didn’t like getting his hands dirty and he surely didn’t want to work under someone like himself, so starting over was the only worthy choice for a gnome of his standing. His cockyness greatly helped keeping his mood high, he didn’t mourn the loss of his fortune, but firmly believed he could earn it back quickly. Whether this was a sign of naivety or optimism is something time will tell.

"Is that a 'Rock' in your pants or are you just happy to see me?"

Despite Schneider’s greedy money-grab, Elford had managed to hide his sparkly ring from the assesment of his worth. This was in itself quite impressive as the disproportionate size of this ring to such a small gnome, made this somewhat of a paradox.

Even if he was poor now, he didn’t want to look it and this ring kept his confidence up. He had the price of the ring estimated to around 25 gold, and even though it had lost much of its initial value, he wore it with pride hoping the day would never come where he would be forced to pawn it. Those 25 gold were basically everything he owned of value now.

Blood elf mage apprentice robe - From one side of the fence to the other.

When faced with the choice of what kind of training he wanted, he was utterly dumbfounded. He thought he would be put to do some paperwork and was now faced with the prospect of actual combat. He didn’t want anyone to throw punches at him and due to having a pathetic amount of muscle mass, melee was an obvious no go.

Elford had previously done business with the Kirin Tor and he remembered how they had always ordered the highest quality gowns from him. He had even sold them a stack of gold rimmed Apprentice Robes of blood elven origin once, but he knew now to keep this to himself. The noble demeanor of the Kirin Tor mages made Elford sympathetic to them.

The Kirin Tor, though, had also been notified of his ill standing, so when he approached them to gain mage tutorship, they advised him to go to Northshire Abbey and contact Khelden Bremen. No one saw in Elford the promising skills of a mage, let alone Elford himself who barely knew what this meant, so the Kirin Tor plainly sent him off to flunk somewhere out of their sight. Elford’s huge finger-ring and posh society clothing didn’t impress the mage trainer Bremen either. Elford looked, acted and essentially was a typical Stormwind tourist. 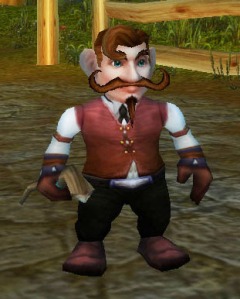 Bremen told him that he should start looking for a simple robe suitable for his new plight, but Elford brushed this off as some silly initiation ritual. It was more important to look good and the tailor fitted set he was already wearing, was in his opinion perfectly befitting. He tried to explain about the prestigious tailor who had made his tuxedo pants, but Bremen didn’t bother arguing with him and decided to send him along to  Zaldimar Wefhellt, the trainer in Goldshire, as soon as possible.

How will Elford fare in Elwynn Forest, let alone Goldshire? Will he be able to save up some gold for later or will he immideatly spend it all on fancy apparel like a Diamond-Tipped Cane?

Can Elford even handle his new fate as a mage?

Next episode: Oh well, maybe he could put it on his CV

6 comments on “Elford the (former) Executive and the Ironman Challenge”