4 Secret Locations to visit before they disappear with Cataclysm

NB! Patch 4.0.3a (aka The Shattering) has been applied. This means these four locations are out and you can no longer visit them!

I’ve collected some of the secret locations around Azeroth, that will be taken out in about a weeks time, and for all those explorers out there – you can still make it!

I’m not talking about Dancing Troll Village nor Ironforge Airport. Those places are becoming quest hubs, so we’ll get plenty of chance to see them. I’m talking about the few not so exuberant yet secret locations, which will disappear soon! The world map is changing and stuff happens, the curious should take that vacation soon and get started on an adventure!

Azshara is in terms of questing an underdeveloped zone, despite it’s undulating landscape and it’s significant role in the lore. The zone looks like an old battlefield, and indeed it is. The old capital of the night elves, named Zin-Azshari, used to be here before the Great Sundering took place, tearing Azeroth into two continents, Kalimdor and Eastern Kingdoms.

This place was however also meant to be a real battleground, but never made it further than the surronding landscape supporting seperate entrances for the Horde and the Alliance.

On the map above, you can just see the two paths leaving up to a cave each. They connect from the main road through Azshara, so they should be easy to find. I took this picture of the Alliance entrance path near the cave entrance, showing how it looks on foot (and in pouring rain).

Since the zone of Azshara will be transformed into a low level questing zone, it is very likely that we will never be able to actually enter the real Azshara battleground. The outer shell still stands, but not for long.

I visited this place at night, and it is probably at midnight this place will come to “life”. I started out from Feralas and just followed the coastline south. For a long time all you see are these bare hill sides on your left and endless ocean on the right, until you spot trees in the distance.

I found this place to have an eerie feeling to it, with fires burning and two boats still sitting at the water edge, a cave to the east full of bones, apparently stretching underneath Ahn’Qiraj. And this place is devout of life, in any form.

Much like Karazhan Crypts, empty places can still be psychologically scary. The Tauren Farm at Silithus is definately a “by night” experience. During day light, it’s just… there. 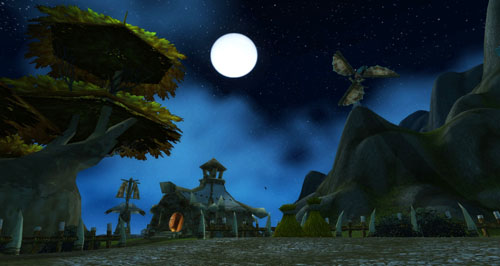 The village of the missing tauren will be gone when the Cataclysm hits, only the cave will be left, still empty with bones and ambience.

These islands are, as you perhaps noticed already, not even on the map. Alternative maps show the real distance from the Tanaris beach shore:

The dark blue water color is fatigued water, so you will need some form of faster travel than swimming, to avoid dying on the way.

The islands are actually involved in a few quests, so maybe you have already visited the Southsea Pirates, and the few mobs around the place.

There’s also a few gnomish and goblin houses, sadly empty, and an oil drilling scaffold between the two islands. A while back, it was a common misunderstanding that this place was the famous GM Island. I’d still say this is a pretty good destination for a distant holiday vacation, but book it soon, for they are gone very soon.

Quel’Thalas is originally the land of the highelves, but is now inhabited by the blood elves and their capital city Silvermoon. With the Burning Crusade expansion, this zone has become available to players, but only through the various portals around the world, not by swimming north.

Quel’Thalas as a zone can still be entered but there is not much to see, except for this little elven shore base.

The easiest way to get to Quel’thalas, is by swimming from the northeastern shore of Tirisfal Glades, until you after a few minutes meet this sight in the distance.

I wouldn’t call Quel’thalas a great tourist site, it has no residents and only a few ruins, but it’s still a calming and soothing place, especially in the evening with it’s small bridge facing the serene ocean.

The picture to the left shows the location of the Quel’thalas shore base, which is alongside the coast right above an undeveloped zone, which I colored orange in the picture. The zone behind the base is empty and of little interest.

The two yellow zones depict the instanced Quel’thalas, and the dotted line shows where the coastline is if you swim around the northern part of Eastern Kingdom, meaning if you’re somewhere above the line, you’ll be swimming and not on land, despite what the map shows. 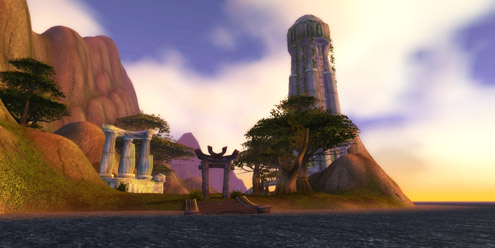 Since this place, like the Tauren village, is placed on the edge of an undeveloped area, it is likely to be changed or dissapear altogether.  I am not 100% sure it will be totally gone though, as the area is blocked by an invisible wall, so I can not confirm this myself. We will have to see.

If you liked this post but don’t have time to go traveling, you can check out my other post called: 10 Most Creepy Things in WoW, which features some spooky places you can visit, even after Cataclysm… at your own risk that is.

This entry was posted on November 18, 2010 by Ironyca in Exploration Finds and tagged Cataclysm, Exploration, Secret Locations, World of Warcraft.