The Celestial Steed – where’s the narrative in that?

Was this a move in the wrong direction for Blizzard? 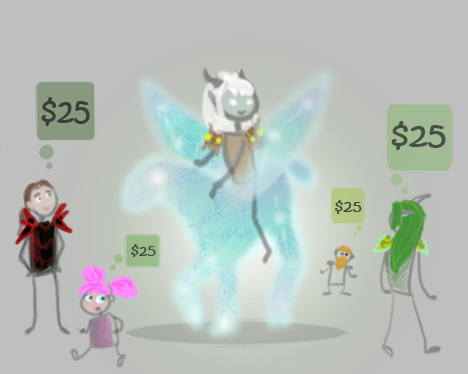 The purchaseable mount from the Blizzard store, has surely inspired some discussion amongst the players. Some reaching apocalyptic hights, others just applauding the mind behind this, whom during 24 hours earned Blizzard several million dollars.

Lots of opinions – and lots of happy pegasus owners. But we can’t ignore the outcry from a lot of players, and the heavy discussions on this “digital only” product, in game as on the forums.

A few questions sprung to my mind though:

What is the value of this mount, other than the affirmed $25 people are willing to pay, for an item that essentially doesn’t belong to them?

Quoting from a discussion thread on the WoW-forums: 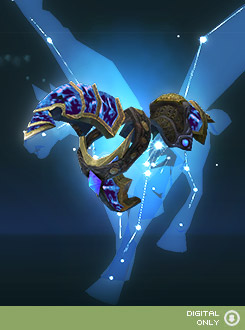 “The mount is a service, like faction changing, race changing or name changing.” (Buyable game items, where do you stop?)

If you went further, you could also claim, that you peripherally bought in game gold. Now you don’t have to spend money on mounts ever again, since this binds to your account, and thus can be used on your alts.

If you compare this product to the other products, such as the pets which has no function, you could claim that function, is what you are buying. You are buying the convenience of not having to use both ground and flight mounts, and the before mentioned convenience in relation to alts.

You can also claim, that you are buying a skin, a cosmetic makeover for all your mounts. This seems to be the Blizzard advertizing strategy, quoting from their online store:

“Freshly born from the Twisting Nether, the Celestial Steed flying mount lets you travel in style astride wings of pure elemental stardust.” (http://us.blizzard.com/store/details.xml?id=1100000942)

I suggest though, that we look at items in WoW through a whole different light.

What happens if we thought of items – all items in WoW – as narratives?

Every item you have, has a story behind it, which connects to your character. The roleplayers on my server has of course discussed the mount in an in character sense, meaning justifying how their character within the WoW universe aquired this mount. For reference – (Celestial Steeds??).

You might think that storytelling is a roleplay server phenomenon. I claim it’s present on any type of server.

Using another mount as an example: 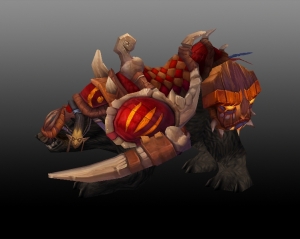 The Amani War Bear tells a story about your character. You had to, at max lvl 70, go to Zul’aman, preferably with a fast and skilled enough group, to unlock the 100% drop chance. This mount was not easily obtained through pugging, and therefore certainly not available to everyone at a whim. Roleplayers will most likely have worked out a reason for their character to own such a spectacular mount. For non-roleplayers, the work you had to put into getting it, is also a story about your character. Other mounts such as the Violet Proto Drake or any of the gladiator mounts, follow the same principle.

In fact, this counts for all obtained items, gear, weaponry, pets etc. Titles and achievements are another “non-material” (in a game sense at least) tale, which has enhanced and visualized player narratives.

These narratives can show many things about you as a player, or about your character’s personality and skill, if you are a roleplayer, that is. If you perhaps are lucky enough to own a pvp mount, it is a rather large status symbol and definately a display of great skill. Perhaps you own the Violet Proto Drake or the Red Proto Drake. Both also signifies skill, but moreso perseverence. For one, the Violet Drake took you a minimum of a year to get!

So my question is as follows: What narrative does the Celestial Steed represent, other than the fact you were willing to pay $25 for it?

“One by one they are systamatically putting a dollar price tag on what previously you obtained through playing the game, through skill, there is no achievement and no skill in paying money, there is no challenge won buy pulling out your wallet.” (Buyable game items, where do you stop?)

I’ll repeat – no gameplay, no achievement, no skill, no challenge and therefore no story.

I came across this screenshot of someone actually working the celestial steed style – not bad! 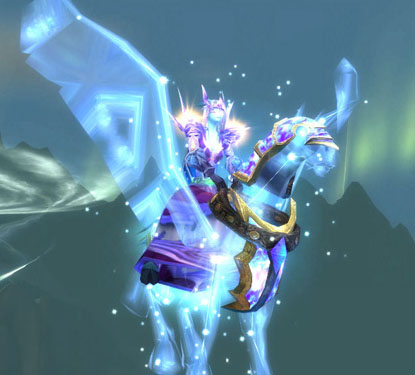 3 comments on “The Celestial Steed – where’s the narrative in that?”

This entry was posted on April 23, 2010 by Ironyca in Opinion and Discussion and tagged Blizzard store, Celestial Steed, Forums, Narratives, Roleplay, World of Warcraft.