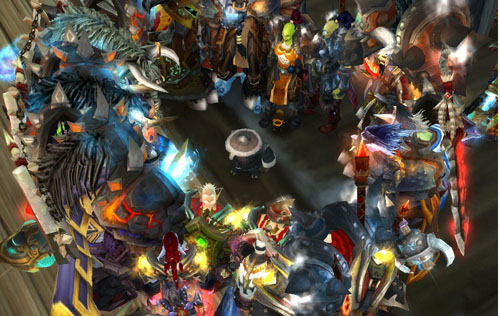 A pandaren has been spotted. WoW Players rushing to the scene. MoP frenzy!

I actually wanted to write an article about performing gaze in WoW and whoopsie, I read on Spinksville that EverQuest 2 is allowing you to map real facial animation and voice fonts on to your avatar.

The reception amongst gamers doesn’t surprise me: “What? this is not a game mechanic? I am looking at my avatar from behind anyways!”.

However, MMO’s are incredibly social games, even if we discount the roleplay, which, as far as I can understand, this is meant for. It makes sense to me that a game company would eventually develop something like this, I guess I expected to see it in a virtual world like Second Life first… do they have this already?

“I’m just not sure whether I prefer that CRPGs keep the communication fairly limited, its one of the things that makes them so good as escapist experiences. There was an originally a notion that your character in a virtual world was a character with a background and culture of its own (even if it wasn’t all that well detailed). The closer characters get to the players, the more that difference fades.”

I can see why voice could cross that boundary, but in terms of making your avatar smile when you smiled, I can only imagine how that would intensify your immersion, given that you can turn the feature off when you wanted to. I don’t look at my characters from the front that often either, but I could imagine conversation with other characters could be enriched by seeing them smile. When I saw the  video linked above, my thoughts were that your facial expressions are not for you, they are for whoever is looking at you. 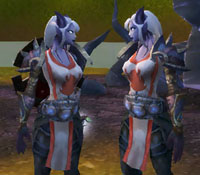 I believe we do.

Since a lot of characters don’t even have pupils, and since we have such limited control of our characters head and face movements, the best way to see where someone else is looking, is what they are targeting.

Sometimes a character will run past me and suddenly stop right before me. Sometimes they turn around facing me, sometimes they just stand with their backs to me. Usually they are inspecting me, of course I can see this if I target them and they have me targeted. I can also be sneaky and just /assist them, and jump straight to whoever they are targeting, without them knowing that I now know that they are targeting me, heh heh.

That’s the thing, someone could be looking at you, without even facing you. This stuff is confusing in WoW! 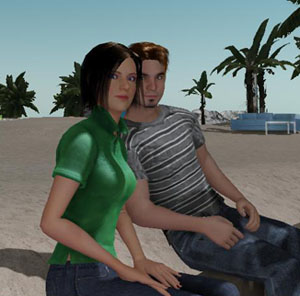 “Look, there’s that stalker I was telling you about”

I visited a (now closed down) virtual world a while ago called Blue Mars. Gaze was also something the developers there had experimented with, but in my opinion with creepy result.

Avatars, including my own, would acknowledge my presence by looking at me, a presence I didn’t believe I had, as I thought I was the lady in green on the picture to the right.

As you can see, she was uncomfortable with me walking behind her all the time, whispering behind my back with the other avatars. Seriously, in Blue Mars Avatars were like the machines in the Matrix, ready to take over the world!

“They didn’t even look at me”

With few exceptions, they did.

I’m talking about the WoW Factor Shows and the initial reason I wanted to return to the avatar gaze. Every event someone will not win a prize, limited amounts of gold and time on our hands means this is unavoidable. Even though we make sure to run back and forth between people and tell them that we’re 3-4 of us looking, someone still says “they didn’t even look at me” and 96% of the time, we did, but we’re obviously not conveying this well enough.

Last time we all sat down and spoke, I brought it up: “How do we convey to people that we are not ignoring them”. I suggested targeting them, even though you can tell what people are wearing by just looking at them, there’s an expectation, that they have not been properly looked at unless we also inspect them. Targeting people at the events could reassure them that someone did look at them, basically we need to perform gaze better! 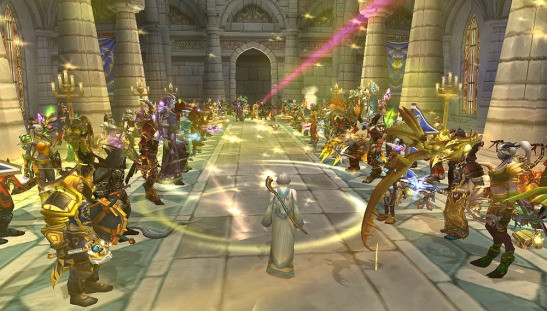 Then Elvine said something I had not thought of: “They think we’re not looking at them because they only see what I see”. Elvine runs the livestream, so his gaze is not cloaked like ours, his screen is his gaze, everyone can see exactly what, and especially who, Elvine is looking at.

Dammit! I thought I had the solution, but maybe avoiding people feeling ignored is not as easy as I thought.

But I would absolutely love to have facial animation in WoW! I would love to be able to perform gaze more accurately.

…Although, then everyone would know I walk around the events looking like this: 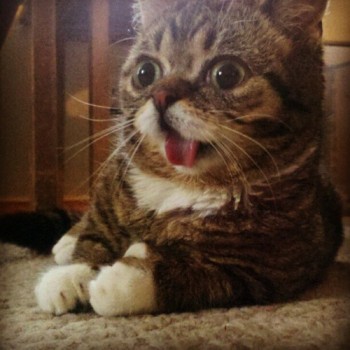