Geek Pride Day – What are my Geek Credentials?

Apparently it’s geek pride day and this geek test has been going around across multiple blogs for us to test how nerdy we really are. I took it myself well-knowing that I was not going to score high.

48 is pretty representative of my status as right in the middle – depending on the company, either too geeky or not geeky enough.

However, I found the test to be very lacking, so… all that makes a geek… I mean nerd (I’ve heard that geeks are like nerds, just without the social ineptitude) are sci-fi, math, physics, chemistry, technology and a little gaming.

A second test, version 2.0 in fact, is also available, but it was still hugely simplistic and didn’t include all the ways one can be a nerd/geek. What about memes? How can one not include internet memes? What about anime? Not that I am into anime, but it’s one of the things that come to my mind when I think about the people I study with. Trust me, they are actually quite representative of geeks and nerds out there… mostly geeks ’cause they are not that socially awkward. We all study computer games in one way or another, that’s pretty geeky! 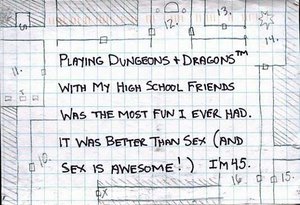 At the end all I could think of was that they forgot a few crucial questions: Are you male? Are you white? Are you cisgendered? Are you heterosexual? It’s my impression that especially the last one is important.

Very Lemonade basically said that unless geek culture becomes less excluding, there’s nothing to be proud of:

“Stamp out harassment of women, increase visibility of PoC, kick the fucking slurs from your language, stop making rape jokes, build video games that are accessible and stop shitting all over people that don’t fit your stupid geek identity. Embrace and build a geek culture that includes everyone in a healthy, positive way.“

But if I am a geek, what kind of geek am I? What are my geek credentials?

14 comments on “Geek Pride Day – What are my Geek Credentials?”