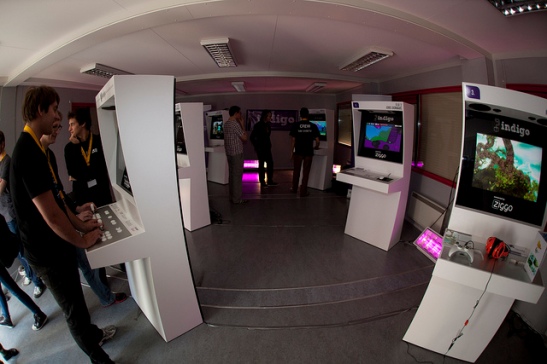 The shifts I got were basically pure luck and barely work at all. I had been concerned with the times I had been given, 9-17, as that was pretty much the time frame of the conference presentations. But, like I said, I was lucky so this turned out to not be a problem at all.
This day I was manning the interactive games. This meant I had to be present in a cabin where various game machines had been put up for people to just come in and try out.
We were then given the message that as long as there was at least one person present at the machines, it was good.
So I spoke to the guys whose game I was assigned and arranged with them that I could see this one session, the one on space and time in Minecraft. The two guys were fine with it.
When I came back after 40 minutes, the place was still full. I faffed around and played some of their games for a while and then realized that whether I was there or not didn’t matter. I then attended more presentations and no problem.
So easy, I barely did anything you could really call work.