Did Elford Sense a Tinge of Irony?

There were two reasons for Elford’s premature departure from Stranglethorn Vale.

First of all, the accommodation just became very rural. It was admittedly jungle standards so his expectations were not as high. However, when he arrived late at Fort Livingston, conditions went from bad to worse. Was this?… 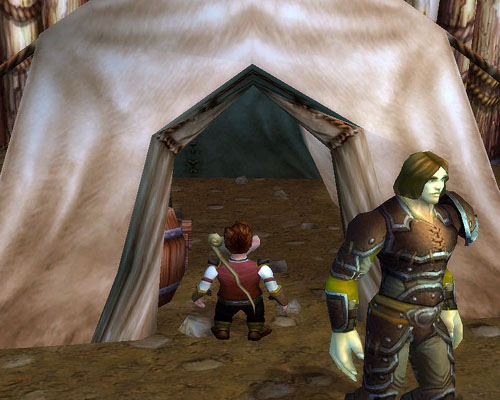 Yes, this was the inn, run by the man himself: Livingston Marshal <Innkeeper>. This tent had nothing inside other than a barrel and a few boxes.

Calling it an “inn” was more than a stretch and so was calling this camp a “fort”, it was more like a campsite surrounded by a fence. Someone was obviously suffering from great delusions…

The other problem was that he quickly found himself in the exact situation he wanted to avoid when starting over from scratch – running lousy errands for pirates in Booty Bay.

It was hard to not squirm at the awkwardness of the situation while MacKinley was giving him the order:

“There’s three phases to debt collecting: asking nicely, asking forcefully, and something I like to call “Phase Three”.

Unfortunately, collecting during Phase Three is something that this old dog can’t do any more. That’s why I employ so many cronies, stooges, mooks, goons, and noble adventurers like yourself!”

Did Elford sense a tinge of irony? He wasn’t sure, but it was unlikely that MacKinley would think highly of someone like him, posh and snooty compared to the rugged pirates around here. Regardless, he collected the debt and decided to leave by boat at dawn and continue on to Northwatch Hold, a military post that had the bonus quality of being a real fort!

– Next episode: Ironyca has Never Stood in the Fire, But Someone Else has!
– From the beginning: Elford the (former) Executive and the Ironman Challenge

4 comments on “Did Elford Sense a Tinge of Irony?”