Elford is now lvl 30 and this is a status on the Ironman Challenge as a gnome mage up till this point.

On the Ironman Challenge

I didn’t expect to hit level 30 while still abiding to the rules of the WoW Ironman Challenge and I don’t know how much further I am able to go.

It was a lot of fun in the beginning, I enjoyed having to be more analytical about how I moved around in the landscape and dealt with quest-chain “bosses”. Especially the latter made it painfully apparent to me how weakened I was as the Grand Magus Doane incident was the first to really give me a challenge. Doane has not been the only one and I have been forced to categorically wait with quest-chain bosses till I outlevel them by 3-5 levels.

I’m at the point where I have to take on quests and mobs that are green and I’m dreading the moment where both will be grey. Knowing myself, this will act as a huge deterrent when I lose the immideate gratification of progress and xp when killing a mob. Fighting my way through the wilderness will be more of an dreadful obstacle than it is right now while I’m still collecting xp from the kills.

Again, a non-staged screenshot depicting a hunter I met in Strangethorn Vale, who killed off a bunch of mobs chasing an overwhelmed Elford. Obviously she spotted my struggles and advised me (IC) to go and find easier pastures. The irony of it was that this was easy pastures, all entry quests were green!

On Playing a Mage

I wanted a spellcaster because I anticipated a melee would be suffering from the lack of bonus stamina that gear provides and would be constantly eating and bandaging. 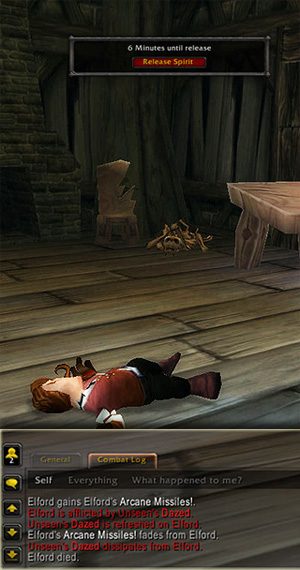 I've also been using Elford for experimental purposes. Poor guy was led into the haunted house at Raven Hill and killed by the Unseen. I needed to confirm that they were still around in Duskwood and they were. Forgive me Elford!

Maybe I was wrong. Being a mage has definitely proven to be a challenge as well, and I wish now that Joy the Nerfed Hunter was my ironman contender instead. In the end I might make her!

Wanding is just not an option, I can’t control mobs long enough to get any decent damage out of just wanding, on the other hand, mana isn’t the biggest of my concerns, keeping a distance and not getting hit is.

I usually like to pay attention to learning how to play the class I am engaging in, so under normal circumstances, I’d take Elford into a battleground to get my keybounds to a millisecond of a reaction time. I’ve always found PvP to provide excellent training grounds for getting closer with the class, but obviously, this is not available under the aforementioned rules.

What’s also concerning me is the lack of talents. It has been difficult for me to come to terms with the fact, that I will not learn how to really play a mage this way. The patterns of play and strategies I’ve been building up, will eventually be completely futile, useless for anything other than being crippled like now.

On Gender-bending a Character

I’ve always found it difficult to connect with my character if it was not reflecting my gender, so while the ironman challenge is a challenge for all of us (Döra listed everyone here), so was playing a male character a personal challenge for me.

From the onset, I thought I had done a good job of picking a somewhat okay class but anticipated that I might have sabotaged myself by making that character male.

To my relief it has gone really well and I have a good sense of Elford and find him special. Without turning him into a roleplay story and caricaturing his personality, I doubt I would have been able to like the ironman character as a dude. If I had had to just randomize a male (gnome) character, I would have truly hated it and struggled intensively with finding ways to “see something” in him. But I had to draw a pretty stereotypical outline of Elford to circumvent that, which by my own standards, was a success at making him enjoyable to play. No doubt if I gave him a detailed background story that goes beyond what I wrote as an intro, he would be a direct Mary Sue.

Whatever! – I’m no high brow roleplayer and caricatures can be really entertaining, at least for the puppeteer.

On Playing on a Roleplay Realm

If you’ve been following the trials of Elford, you’ll know that no screenshots have been staged and all his adventures that include other players are actually genuine. I chose to play Elford on my original realm, Argent Dawn EU because I wanted to deck him out in pretty (but useless) bank alt clothing. I later transferred back everything I had given him in starting capital and made him earn his way.

I don’t regret playing on familiar territory, which is not what most of the other Ironman Challenge players have done, but if I had to pick another fresh realm, I would without a doubt have opted for a roleplay realm again, simply because it has offered plenty of encounters with roleplayers (and some not) who have added joyful and spontaneous player-content to Elford’s adventures.

I might be looking for ways to attract more of this, including using the addon FlagRSP, which gives you the option to display a window adding extra information about your character that isn’t conveyed through character design/gear etc. I have not used this addon before, so this is a new and exciting part of the Elford setup.

On the Future of Elford

I don’t see Elford carrying a mage flag through the finishing line at 85. I don’t even see him going to Outland as an Ironman.

This part of Duskwood was like a death trap.

I’m considering making Joy into an Ironman although that wouldn’t really be Ironmanning it, which however is fine by me.

Elford is losing his fun more and more, and the moment where he struggles too much with grey mobs for green or grey quests, I would just not be enjoying playing him.

I am trying to think up a new and interesting way of leveling that would still be a challenge, such as perhaps keeping his gear white and grey, but taking on a spec. Or upgrading gear that is not visible, such as rings and trinkets, using only drops and quest items. I’m leaning towards the former, probably a frost spec but without the huge and ugly elemental out.

There is one thing I’m sure of: I’m finding Elford a lot of fun as a roleplay character and portraying his journey as a story makes him vibrant in my mind when I play him. I will be continuing the short stories about him, even when he might not be an ironman any longer just because the things that happen to him amuse me, he amuses me, and writing about it all here amuses me too.

Next episode: Thank God Elford Didn’t Suffer From That!…
From the beginning: Elford the (former) Executive and the Ironman Challenge