The next step was to travel to Duskwood, a place that from the onset gave Elford the chills even more so than casting any of his frost spells.

He would come back later and sort this Doane thing out, at least he would still stick to his promise. However, it looked like the rumour of Elford’s failure at Redridge had spread to Darkshire. 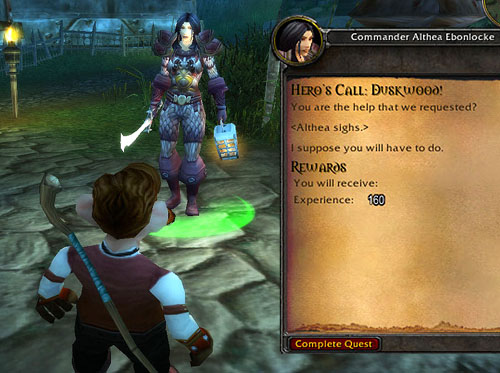 Under normal circumstances he wouldn’t have accepted this kind of attitude, but maybe she had a point.

And she did, Elford made the mistake of running errands for Abercrombie, a hermit residing near Beggar’s Haunt. After all the hard work with killing ghouls, he realized he had aided a mad man in creating Stitches, an abomination Abercrombie now unleashed upon Darkshire.

Feeling responsible for this mess, Elford did his best to encumber this monster while the guards were joining in to bring the giant down. Multiple times Stitches turned around and targeted Elford, who with much hassle fought to stay out of range. Running around the houses made a very comedic game of tag, although Elford didn’t find it amusing- it after all was his life that was at stake. Stitches was hardskinned but eventually killed. In a moment of both pride and absurdity, Elford posed in front of the corpse yelling “ta-daa!”, trying to convince Althea Ebonlocke, who had greated him with a sigh, that it was all planned and that he was capable of performing nothing short of miracles.

Making abominations appear and then take credit for killing them didn’t impress Ebonlocke much. At least he had managed to keep his attire relatively clean, but getting into this much close contact with so much rot made murlocs look cute in comparison and Elford wasn’t even done aiding Duskwood yet.

Next episode: “u afraid of duel?”
From the beginning: Elford the (former) Executive and the Ironman Challenge

2 comments on “Making Mistakes in Duskwood”