Elford in Goldshire By Night 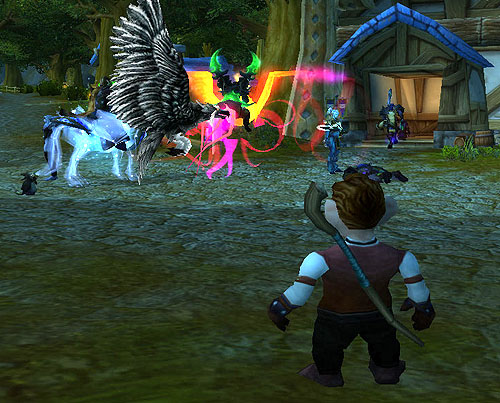 Goldshire was known for its eclectic population mounting sparkly horses and neon birds. Elford was used to this kind of circus, the same people hung around Stormwind and then during various hours of the day, they traveled the short distance from the capital city to this nearby almost suburban village.

Even though Goldshire was geographically separate from Stormwind, the streets acted as any slum region in a big city would, full of everything you could think of from high ranked heroes to Elwynn misfits.

Elford had heard the rumors from Goldshire, it seemed everything related to drama erupted from here, so of course he had been suspicious but also curious when he was advised to rent a room at the Lion’s Pride Inn.

When he stepped in, he was met with an astonishing sight and he felt fortunate to have followed the proposal first given to him at Northshire Abbey. This was marvelous!

Ladies wearing a wide selection of some of the finest garments he knew of!

He weaved excitedly and unhindered around their feet, touching the delicate textures of the fabrics. Sometimes it really paid off to be a gnome and the rumours about them being a sought target for troll sacrifices, only made him feel all the more special.

Elford was able to spot these outfits amongst others (confer the screenie below). This must be what they call Goldshire fashion.

Before long he started to notice that something was a bit off. When looking up, he wasn’t able to read the situation… what was actually going on here?

The crowd stood facing the middle of the floor between the entrance and the bar, as if a stage play was invisibly unfolding right in front of everyone. These ladies were basically lined up only to stand still as if holding their breath, no one uttered a word and the inn was almost silent. Even the bikini woman and pink haired gnome sitting facing each other were quiet. Had time stopped or did shady things happen outside the sight of swish and well dressed gnomes such as himself?

He decided to finally go upstairs to his room while thoughts about a theoretical new market here at Goldshire for clothing, made his mind buzz. When entering his bedroom, he saw Wefhellt was still standing there. Wefhellt was always standing there. Elford indirectly hinted that he wanted to sleep and that Wefhellt was more than welcome to leave.

Less subtle measures of saying goodnight to the stubborn mage trainer didn’t bear fruit either. Instead Wefhellt kept talking about being stationed here to direct and aspire young mages and some disjointed babble about all the things one can witness when just standing around in the bedrooms, at which Elford just raised an eyebrow. He had no idea what Wefhellt was on about and decided to rest regardless of the awkward situation. There was only one double bed in the room and he fell asleep with crossed fingers that Wefhellt wasn’t going to crawl into bed too and snuggle up against him. Mage training had its limits.

Next episode: Elford should have known by now not to judge the skill on the size of the sword
From the beginning: Elford the (former) Executive and the Ironman Challenge

6 comments on “Elford in Goldshire By Night”