Self-Nerfing for the Sake of Joy

What do you do when the challenge is gone and everything is too easy?

That’s how leveling feels right now, and even though I’m playing a hunter, a class that I’ve struggled with in the past, killing mobs can be done by pressing a few buttons – random buttons that is. I hadn’t been playing my hunter Joy for a while, and now when I turned back to her, she couldn’t live up to her name.

It wasn’t because of the hunter class, in fact she could have been any class as it is right now, things drop by the evil glance of my kitty. Joy’s pet Froy can easily solo anything, actually I think Froy would be able to carry Joy, given she was lazy enough and didn’t want any loot.

I also accumulate experience too fast. I’ve purchased one heirloom, the dagger “Balanced Heartseeker”, but nothing increases my xp gain, as I didn’t want to be level 85 in a week. I want to finish off a zone before going to the next one, I want the whole story of the place and I want to see all the quest-lines. I have just been in in Azshara and I outleveled and outgeared the zone completely when I left. Where’s my challenge?

Yesterday I aquired my first chestpiece of rare quality (blue) “YEE….eesss…. meh”. Under normal circumstances I would have been thrilled, equipped the gear and headed out to enjoy the increase in dps and survivability. Times are different now, random buttons kill mobs, I’m overpowered in my quest-greens and this way I will never learn how to play a hunter.

Then I thought about Thriftee, the brave and self-reliant hunter, who never spent a dime while leveling, who never bought skills, nor gear, and never took a flightpath.  Thriftee had himself and Bear to count on and he would have to make it work as well as he could (and he did). So I thought “here’s my answer, I need to nerf myself!”, so I spent some time finding some suitably crappy, but neat gear that would lower my stats and keep me on my toes. It won’t be a challenge similar to Thriftee’s, I’m allowing myself full freedom to twink her in the future, if that’s what I want. Joy’s challenge is simply for me to have a good time, that’s all.

So the rule is, I can upgrade my neck, trinkets and rings. I’m sticking with my heirloom dagger, and I am allowed to upgrade the offhand as well. The rest has to stay the same. I chose the Tattered set, which is common quality (white) cloth clothing with no stats and around 9-21 armor – OH YEAH! 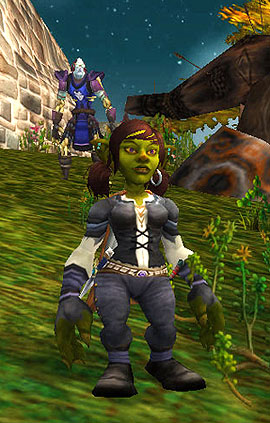 Joy's nerf gear - bad but good looking. Am I being admired from the back there?

A Hunting Bow for a hunter... that'll do!

The bow I’ve stuck with so far, is the “Hunting Bow”. It’s pretty crappy, and depending on how hard it will be later on, I will replace it. However, right now it’s not an issue.

I’m unsure about my cloak, I’m still waiting for a good looking one to come along, one that will match my set, so right now I’m just wearing a low-level quest reward. 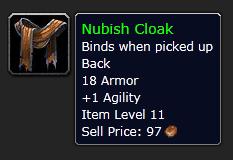 OMG I HAVE AN ITEM NAMED AFTER ME!

I also have this cloak, and even though it has a much suitable name, I’m not happy with it’s blue and gritty looks, it’s ugly! What a shame.

I’m not sure about the headpiece either. I’m unlikely to have it displayed, so I’ll probably upgrade that itemslot too.

For the sake of Joy

Some would probably shake their heads in disbelief – “what is she doing?”. I’m still waiting for someone to whisper me that my vendor bought cloth set, is not a very good choice, or perhaps I will just become a notorious huntard on my server without ever knowing.

The thing is, there are different ways of playing the game: some play it to win, to figure out how to be the most efficient and then execute it perfectly, to be top-notch. Others play it with a more process-oriented mindset, it’s not about the result, it’s about the journey. Sometimes we switch between them depending on what plans we have for our character. I don’t really care about gaining levels on this character, it’s the travel, the experiences along the way. Joy is all about the joy, not the speed nor efficiency, I would have named her that then!

6 comments on “Self-Nerfing for the Sake of Joy”