Larsa allerted me of another hidden location, a fleet of ships off the shore of the Arathi Highlands Farm. The Arathi Farm as some of you might know, is one of those old, but now, well known secret places. If you go to the small harbor there, you can spot the fleet at the horizon, if your viewing distance reaches far enough.

They are located in a fatigued zone, so it’s not a place to hang out, but you can easily fly out there and back again without dropping dead.

I did a little research on this and found they are scenery with a very specific purpose. The quest that leads the Horde into Twilight Highlands has the player in a zeppelin flying over this particular area. The picture below is a screendump at 2:41 from a youtube video documenting this quest: 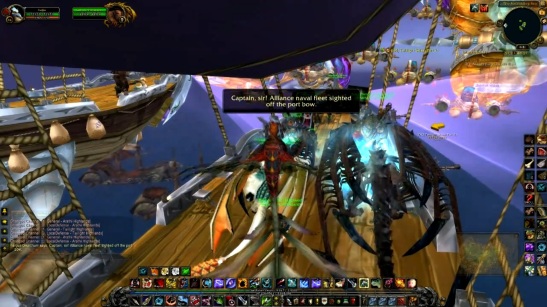 Since the fleet is so purposefully mentioned by an NPC, I struggle with the prospect of adding it to the Cataclysm Secrets and Hidden Locations post. Then again, if you’re an Alliance player, how would you know about this – ironically enough?

I decided to put the Alliance Fleet in a seperate post, I thought it was an interesting addition to the old hidden Arathi farm, which before The Shattering (patch 4.0.3a) was completely secluded and had that almost abandonded feel to it.

Funnily enough, when I visited to snap the pictures, I wasn’t alone. This striking blood elf rogue was standing there alone overlooking the sea wearing Bloodfang Armor. See, Horde players evidently know about the fleet, while Alliance don’t!

This entry was posted on March 13, 2011 by Ironyca in Exploration Finds and tagged Exploration, Hidden places, The Shattering, World of Warcraft.