Uniqueness and the Trademark of the Female Dwarf- Gender-bending pt. 7

The Gender-bending series is based on the result of my own little survey, attempting to map all the motivations of WoW-players playing a character of the opposite gender. Each part deals with a certain aspect of gender-bending in games.

Part 1: Advertizing the Survey
Part 2: Throwing myself to the lions….I mean trolls!
Part 3: The Spectacle of Play and Characters
Part 4: Avoiding Clones
Part 5: To Wear or to Not Wear Robes
Part 6: Bring the Player, not the Gender
Part 7: Uniqueness and the Trademark of the Female Dwarf
Part 8: In Game Advantage
Part 9: For the Love of Names
Part 10: Summing it Up

In this part we will  look at the uniqueness factor

As your character is your visual representation in WoW, wanting to stand out was also a motivation for some. Even though it can be relevant to wanting nice aesthetics, it can also defy them.

Nine people strongly agree to this statement in total and these are all male. Four of these chose female dwarf and three of them specifically mention female dwarves in their comments. This is consistent with Ducheneaut, Wen, Yee and Wadley’s (2009) findings in the study Body and Mind: A Study of Avatar Personalization in Three Virtual Worlds of male players favoring avatars that stand out more than female players, who instead score higher on creating idealized versions of themselves, according to this source. 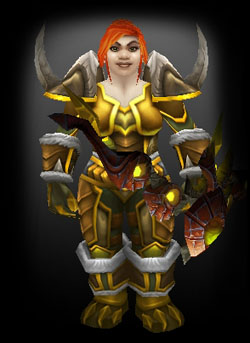 One female dwarf player states in the comment field:

“I don’t really care much about the gender of my character, but I’ve kind of made playing a female Dwarf my “trademark”, if that makes any sense.”

For this group, gender is not the issue but rather a means to and end, by picking a combination of race, gender and class to create a more rare looking character that will get noticed by others. 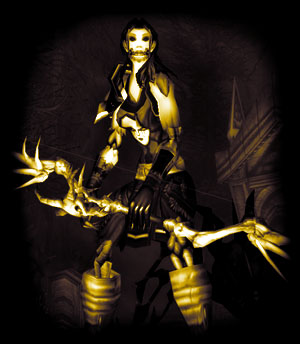 “I just liked the looks of the gear, the bow animation and all the animations were better, also I dont like to be the copy of many other people, and you really wont see a female undead hunter every day.”

Unique can also be ugly or funny looking

Although no one specifically stated that they had gender-bended in order to create a unique but inasthetic looking character, a lot of the players motivated by being unique probably knows that their cosmetic priorities aren’t shared with the average WoW-player. 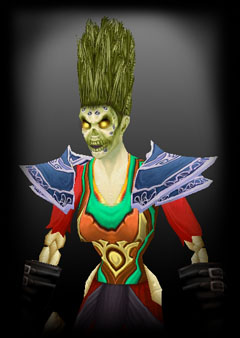 During The Burning Crusade, I remember spotting in Shattrath the ugliest character I’ve ever seen. It was a female undead with the straight up scared-to-death-hair, and that hairdo is just the worst in the game!

Not only did I find the character itself looking truly horrible, but she was also dressed in what players back then remember as the harlequin-esque looking leveling gear of that expansion. I found the character worthy of a screenshot but have lost it since, so you’ll have to do with this look-alike I made in Model Viewer. Today I wonder if 1: It was a gender-bender, and 2: He did it to be unique, and looking ugly/funny was just part of it.

To be an individual, separate and different from others, is important to a lot of players within the social sphere of WoW, and gender-bending is just one of the tools to achieve it. This is also largely supported by the naming rules of WoW, where a name can only be attached to one character, thus making duplicate names impossible, as surnames don’t exist.

Besides your name, uniqueness is also largely measured by how your character looks compared to others. Think about epic gear in general – it’s meant to be rare and not easily accesible, or consider the many players that go out of their way to collect a special looking gear set or a mount, such as Baron Rivendare’s Mount “Deathcharger’s Reins”.

It’s not just about feeling different, it’s also about standing out and getting noticed.

I think most players can recognize themselves in this category. Whether they go for fancy gear, rare mounts or female dwarves – I’d argue it’s the same thing.

The coming part will deal with the in game advantages that theoretically can be attained by gender-bending. Even though there’s no difference in mechanics between the genders of the same class, the advantages may well be psychological, as we shall look at next.

3 comments on “Uniqueness and the Trademark of the Female Dwarf- Gender-bending pt. 7”

This entry was posted on January 25, 2011 by Ironyca in Opinion and Discussion and tagged Characters, Gaming Culture, Gender-Bending your Character, player motivations, Survey, World of Warcraft.