Bring the Player, not the Gender – Gender-bending pt. 6

The Gender-bending series is based on the result of my own little survey, attempting to map all the motivations of WoW-players playing a character of the opposite gender. Each part deals with a certain aspect of gender-bending in games.

Part 1: Advertizing the Survey
Part 2: Throwing myself to the lions….I mean trolls!
Part 3: The Spectacle of Play and Characters
Part 4: Avoiding Clones
Part 5: To Wear or to Not Wear Robes
Part 6: Bring the Player, not the Gender
Part 7: Uniqueness and the Trademark of the Female Dwarf
Part 8: In Game Advantage
Part 9: For the Love of Names
Part 10: Summing it Up

Gender-bending pt 4: Avoiding Clones is about the wish for variety.

Gender-bending pt. 5: To Wear or To Not Wear Robes, handles the aesthetic motivations.

Part 6 deals with the motivations that grow out of the interaction between players, whether it’s a matter of blending in, exploring yourself or how the community differentiates between male and female players.

Social interactions as a cause to gender-bend is, as shown above, a reason female players put much higher than male. This is also the category with the biggest overall differences between male and female players, and as such, this post will mostly focus on the female player’s point of view.

The option to seamlessly blend in with the male players, was a motivation when choosing a male character for some female players. This particular player makes WoW sound almost like a boy’s club:

“He was my first male character and I did find that people reacted to me differently as a male character, there seemed to be no possibility in their minds that I could be a female player – which I liked.” 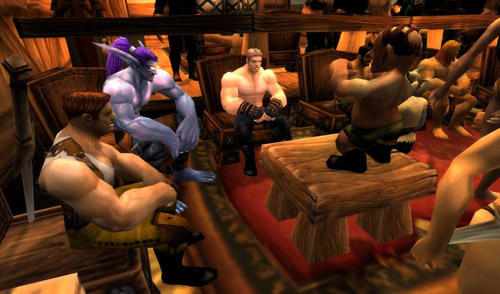 Another factor is the view of female players as a romantic interest:

“Being a female In Game attracts way too much unwanted attention, that’s the main reason I play mostly Male Gendered Characters.”

“So people do not know im a female irl! so much hassle can be had if teenage boys know they have a female in the group or guild.”

All three players seem to point to the wish to blend in and be treated as neither different nor special.

I believe the case of attention is a side product of WoW as a social environment, perceived and utilized by players in similar ways to chat services, although female players, when identified (!), sometimes get more romantic attention than their counterparts. This probably has something to do with them being vastly outnumbered and of course the risk-free anonymity of the internet. 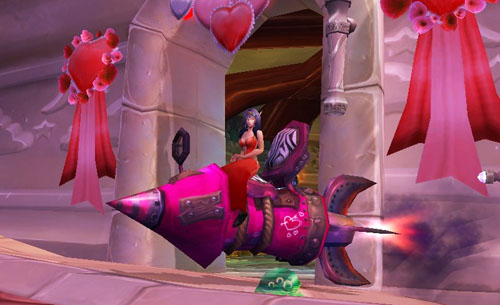 Looking at the grand picture, choosing a female character is actually not that inefficient for “hiding” either, thanks to the male gender-benders, but picking  a male character is in fact more bullet proof. Nick Yee, the author of The Daedalus Project, sums up the stats (2005):

While it looks like the community has absorbed this difference in occurence as standard knowledge, some players are consciously using this to their advantage. 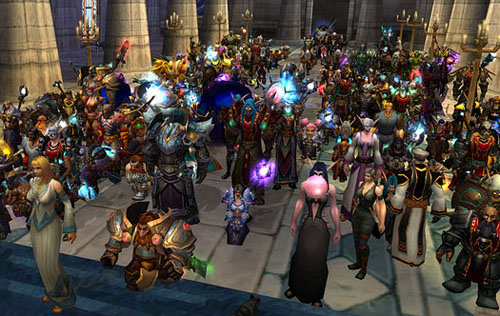 These patterns might have changed as WoW has continuously grown in size since 2005. The article Computer Games Are Now Gender-Neutral (2008) from Softpedia.com cites a female gamer population closer to 40% in games of the MMORPG bloodline:

“In many cases, stereotypes reflect what I would call a ‘cultural time lag’. What we think about men and women and videogames may have been true 10 or 15 years ago, when there were mainly console video games or single-player games. But what we’re seeing now is that games become social, and as these on-line games become communities then the attraction for that kind of behavior might increase for women,” argues the lead researcher of the new study, Scott Caplan, a professor at the University of Delaware.“

40% seems a bit too high to me, I hear the 20% women vs. 80% men more often. Still, pushing towards a balance between men and women in games, can erase some of these reasons of gender-bending we saw above.

“I Will Protect You”

It’s a notion a lot of female players can recognize, and also mentioned by Esther MacCallum-Stewart in “Real Boys Carry Girly Epics: Normalising Gender Bending in Online Games“ (2008): Female players are sometimes met with a differentiated treatment, where they are regarded helpless and in need of protection (i.e. from a male player). Other times female characters are treated more generously, help is easier attained and players can be more forgiving if a female player makes a mistake.

Despite the fact male players choose the option of gender-exploration less often than females, this male player had a very distinct reason to try out gender-bending for himself, which falls along these lines:

This person is amongst the 11% male players that did it to uncover/discover the differences, where females hit 31% on this question.

I have a personal experience with a male character wanting to rescue me. Several years ago I was playing a female troll shaman at low levels in Warsong Gulch. This random male troll runs over and states in say “I will protect you”. I remember finding it odd, as this person wasn’t a healer, and more awkwardly, I ended up protecting him as he rushed forward and almost got himself killed in his “heroic” attempts to “white-knight” me. 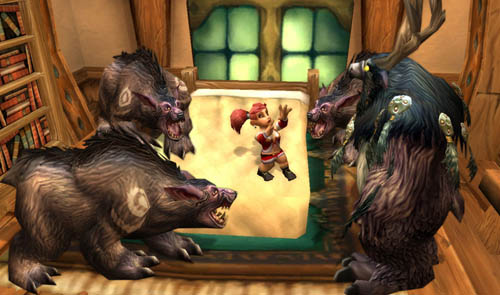 I can’t help but wonder if this has something to do with the conventional stereotyping of females characters in games, placing them as objects for the male players to rescue or win. As many games derive their universes from the old medieval myths and sagas, which put emphasis on the male protagonist being the grand hero, we’re pretty much looking at an old tradition preceeding digital games by centuries.

The Other Side of the Coin

So far it looks like being female in WoW is all presents and helping hands, but the treatment is often dichotomous. There is another side to this coin, where forgiveness is replaced by distrust in the female player’s skills and abilities to play well. It can be disheartening to be treated as an inferior player, not fully capable of performing to the standards of the male players. This could act as an incentive to avoid this confrontation by gender-bending, although no female players specifically stated this as their reasoning.

Zinn at Jinxed Thoughts wrote the post Are gaming girls too pampered to be good? where she reflects on her own experiences as a female gamer and how she moved towards seeing herself as a more nuanced and competent player without letting the girl-tag dominate.

“I didn’t want peoples attention on anything but the fact that I was a fellow gamer. Moving away from this way of playing made me realize I could be an interesting person just on the basis of my gaming qualities, something I hadn’t thought about before. It might sound silly, stupid or sad that I had this view of myself. But since the first day I had told someone about my gaming it had always seemed like the fact that I was a girl was the most interesting and important thing. Not what I played, how good I was at it or what I thought about it. And so this view stuck with me. My first months of playing WoW definitely confirmed this view.“

Ranging overall low, but still substantial (18% and 35%) is the motivation to consciously play with gender via roleplay:

“If I want to roleplay, I want the challenge of playing something which I have no immediate experience in, as it broadens my horizont, and makes it that much more worthwhile. And you learn a lot about yourself when playing the opposite gender.”

Keeping the previously quoted male player’s personal experiement in mind, the following story puts roleplay more in centre, but also has a much more sinister result than the former story of help and forgiveness.

Trying Out a Different Body

This story, written by Quinnae Moongazer at The Nuclear Unicorn, neatly exemplifies all three questions under the Social Interactions category. It starts of with the intent to test out a theory: To see if the claim is true – that women are treated differently than men in WoW.

“She made a bit of a wager with my friend: roll up a female character, play her, roleplay (RP) her if you like, and don’t tell anyone you’re a man in real life.

My friend agreed, being the adventurous sort and an avid RPer to boot, and went forward. To this day he still tells me how his experiences over the course of the next month completely changed how he understood the treatment of women in games like this. He found himself flirted with, harassed, the target of other unwanted advances, as well as finding out why chivalrous acts could be construed as condescending or suspicious. He even discovered that in an RP guild he was fought over by some of the male officers in a way that culminated in theatrics that eventually sundered the guild.”

Blending in is motivated by external factors, while this form of gender-bending is very experimental and performed due to a personal curiousity. Virtual Worlds contain this power for users to try out a different body, but despite the fact virtual worlds, including WoW, make anonymous playgrounds for exploring the concept of gender, females in my survey tended to be more lenient towards this option, perhaps as a result of entering a male gamer sphere and wishing to understand it better.

This topic is so vast, it can easily be extended further. As Blizzard decided to take down the old WoW forums and not offering an archive for the users, I’m unable to access an old topic with several pages of female players accounting on their opinions on the dichotomous treatment I discussed above.

The thread had it all, from the female players claiming these differences didn’t exist, to others reporting having been extensively sexually harrassed and stalked, to others who say fellow players are quick to place them as guild drama queens and manipulative “loot-whores”, to some saying they had only had positive and friendly experiences with others.

The thread illuminated not only the negative experiences of many, but it also showed that a lot of female players had not been confronted with these issues, making me reckon (and hope) the differentiation is an exception and not the norm. What do you think?

The next part will look at the wish to have a character that stands out from the crowd, and thus we shall look at the motivation of wanting to be unique.

7 comments on “Bring the Player, not the Gender – Gender-bending pt. 6”

This entry was posted on January 22, 2011 by Ironyca in Opinion and Discussion and tagged Gaming Culture, Gaming History, Gender-Bending your Character, Norms, player motivations, Roleplay, Survey, World of Warcraft.