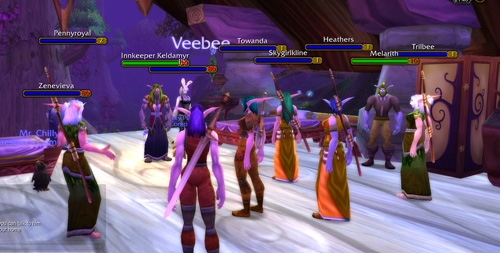 Field trip to WoW is a blogpost by Vaneeesa Blaylock (In WoW “Veebee”), a Second Life performance artist, who invited her friends along for a trip around various virtual worlds, WoW being the second in line.

I thought it could be fun to make myself available as a tourguide, since it could give me a new perspective on something I’ve grown accustomed to: How I percieve and understand WoW. Also being able to chat to people about our different virtual worlds and avatars was a great bonus.

The “Second Lifers” entered World of Warcraft through the means of a trial account, which is free although restricted. Vaneeesa’s guide to setting up a trial account is actually very helpful and I recommend it, if you should be interested in taking a hike here as well (and should you be needing a guide, you know who to contact!).

I chose my draenei shaman as my character, and brought along Zenevieva the kitty druid to accompany me. We started off in the starting zone for night elves, Teldrassil.

The group grew quickly but was surprisingly silent. Trial accounts using /say is not visible to ordinary players (due to goldsellers advertizing), and we spent most of the trip having forgotten this, and thus lost out on a more synergic experience for the first part of the tour.

Planning the route became pretty simple, when it dawned on me that trial accounts only have access to vanilla WoW, meaning they only get to see the game as it was created in 2005/6. 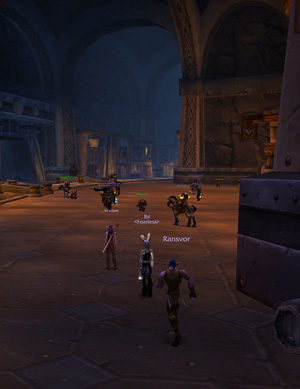 I couldn’t take them to the floating city of Dalaran, nor Silvermoon or Exodar which I think are beautiful cities.

Instead, we took a trip to:

6.  And in the end watching the view over Dun Morogh from the ledge at the Ironforge Gates.

…avoiding Goldshire was a given.

A horde tour could possibly have been more scenic, using the zeppelin between capitals. 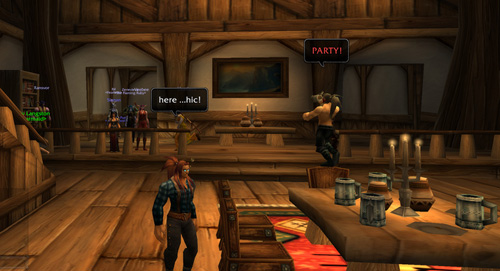 When we had to pick up Frossl and later Ransvor, in order to add them to the group, a major difference became evident: Distance and time in WoW and Second Life are not the same.

We had already earlier established how the day cycle differs: In Second Life a day is 4 hours long (3 daylight hours and 1 nighttime), in WoW it follows earth hours, depending on which geographical server you are connected to.

TP’ing means teleporting. Mages can teleport in WoW and Warlocks can summon, but it’s not openly available to go wherever you want in WoW in an instant.

Vaneeesa writes: “You really were in a place, and other places and distances had real meaning. TP-ing in SL is very convenient and very powerful and IDK if I’d give it up, but it really does diminish the experience.“ (Field Trip Report: WoW!)

Distance is in direct relation to time, as what really matters about travelling, is how long it takes. It’s a choice to make, when creating a virtual world. The time it takes, to travel somewhere inside this world will, besides it’s actual surface area, act as a projection of percieved size. Second Life, as I understood it, is much bigger than WoW, but travelling is not an issue (besides teleporting you can fly without a mount!) In WoW you are bound to slower means of transportation, often land- and flying mounts, not to mention gravity. 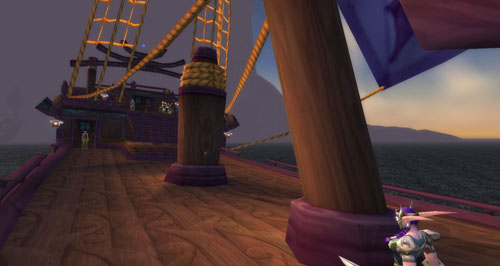 It’s interesting – why would game developers choose for us to travel slowly, basically wasting our time, when the fastest means of transportation is a choice of design?

I would imagine travel defined by avatar percieved geographical relations, time is one of the tools you can use for your virtual world to resemble realistic space.

Are you an Avatar or a Character?

It became clear to us, that our new friends from Second Life were impressed by the WoW world as it was created  by Blizzard, but unimpressed by the fact they couldn’t add to it, there is no user-content. (In fact, all of WoW is owned by Blizzard, even your lvl 80 character is virtual property of WoW, you are just renting it and the access to the rest of the package deal. It feels absurd to me, that my hard-earned gear, gold and my characters, that i’m personally attached to, isn’t mine, never was and never will be).

Also the character design options were much fewer, than what they were used to, as in Second Life you can be anything.

Despite the samples I found above, I get the impression most people feel more comfortable in a human like avatar.

I noticed straight away our various ways of defining our visual representation in whatever world we were in.

In second life, they use “avatar” or “resident“. I’m not sure of the difference, other than resident being tied to Second Life termonology, and avatar being a broader term, meaning a direct representation of a person.

In WoW we primarily use “character“, I also have friends who prefer “toon“.

“Character” ties to the idea that only part of someones identity is represented, and toon addresses the fantasy style that is WoW design.

Character also means: “a person represented in a drama, story, etc.” WoW being based on a substantial catalogue of lore books, perhaps explains the choice of the word. This storyline is also the framework within which characters are defined and interpreted.

How many alts does it take to make a main?

Near the end of the tour, we automatically ended up discussing the idea of having alts as a reflection of the different aspects to an identity, as Vaneeesa writes:

“While a lot of SL peeps do create alts for various reasons, I think a lot of SL peeps also powerfully identify with a “main avatar.” That may also be true in WoW, but it seems like multiple avatars there is much more encouraged.” (Field Trip Report: WoW!)

Having a main is widely the norm in WoW too, both for roleplayers, PvP’ers and raiders, because more time invested means more goals achieved. 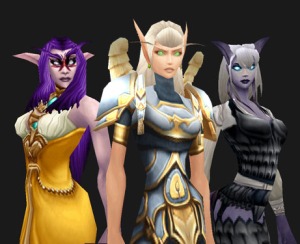 However in the forthcoming expansion, Cataclysm, I believe players will distribute their time more equally between mains and alts, perhaps even having two mains (if that doesn’t defy the definition), due to the shared lock out of both 10 and 25 man raids.

In Second Life you can only have one avatar per account, but that one avatar can change appearence to whatever whenever. That is in no way the case in WoW, as a character’s appearance is bound to many factors: race, class, gender, level, face, skin color and name (Hair style and color can be changed at the goblin stylist shop, the rest can be achieved through buying a character makeover/race-, faction or name change through Blizzard. These are however considered big decisions by WoW players).

Due to the restrictions in the WoW character creation, factors such as class and race encourage you to try out a different playstyle to change and perhaps expand your game experience.

Realms and Community – In WoW it’s all about which server you’re on.

Ironically, WoW players are not connected completely, we are bound to a server/realm and therefore live in identical parallel universes. On Argent Dawn EU during peak hours, there’s approx. 3200 players online at the same time (Data based on Aug 2010).

The RealID friendslist has although changed the complete segregation, and if you have befriended someone, you can chat cross server, but still not meet in character through fx simple teleporting!

The feeling of belonging to a community, I’m guessing, is stronger in Second Life. In WoW a realm acts almost as a nationality, and that is practically true with a realm such as Crushridge, which is largely Italian.

Lag – at least RL doesn’t have it!

The day the tour took off was a nice lag free evening. Most days are lag free in WoW, and if they are not, the forums and chat channels fill with complaints. Combat becomes unplayable with only a little lag, so players have a very low tolerance. “Going from Second Life to WoW was like an iron lung victim making a pilgrimage to Lourdes. Two words: Frame Rate.“, Vaneeesa writes.

Second Life uses an average of 80 kbps downstream. WoW uses 30-40 kbps, which is comparable to Second  Life while remaining stationary. The difference lies within the game system, the way in which data is being handled.

Underneath is a picture of the floating city of Dalaran – the place that does lag quite often, due to it’s current status as the most interconnected capital in WoW, and thus most populated.

I have all of WoW on my computer, it takes up almost 18 GB (as of patch 3.3.5). All skins, meshes, objects – everything is not downloaded, but instead preinstalled. The only thing that needs downloading and server response, is relative postitioning and interactions between me, other players and npc’s. This helps keep the framerate down and steady.

Second Life exists on different external servers, rather than the individual computer, and thus needs to be downloaded when travelling to different regions, which makes the downstream spike, reducing framerate. So downloads can go up a lot when exploring in Second Life. Lag is the price to pay for user-generated content. 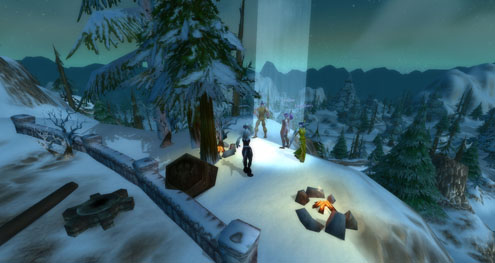 In the end I can say that I’ve grown more curious about other virtual worlds, including Second Life, which luckily for me, is free to use. 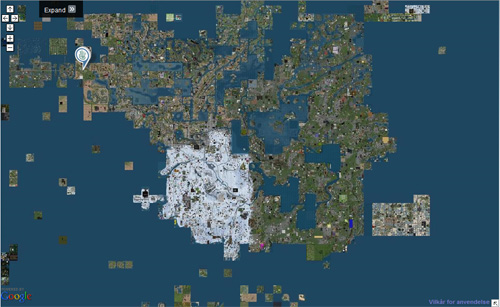